"Epstein: The Man Who Made the Beatles" Transfers to London's West End!

Bill Elms and Jen Heyes Productions Ltd, the Liverpool producers of Epstein: The Man Who Made The Beatles which premiered in the city last year to great acclaim, are delighted to announce that the play is to open at London’s Leicester Square Theatre in Summer 2014 for an initial 6-week run. Tickets will go on sale on Thursday 17 October at 10am.
Epstein: The Man Who Made The Beatles is a window into the private world of the music entrepreneur whose stellar career as Beatles Manager made him a household name yet whose controversial personal life remained very much in the closet. Brian died in 1967 of an accidental overdose at the age of 32. 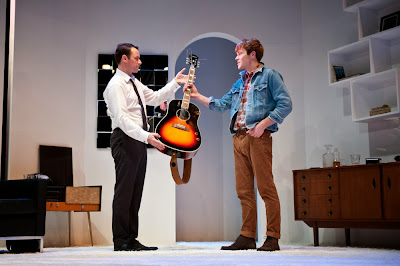 Acclaimed stage and TV actor Andrew Lancel (Coronation Street, The Bill) and newcomer Will Finlason will return to the roles of Brian Epstein and the fictional character ‘This Boy’ respectively, for which they each received rave reviews during the initial Liverpool run, where the show premiered in November 2012 as part of the city’s official Beatles 50th Anniversary celebrations at the Epstein Theatre.
Andrew Lancel said: “As a huge Beatles fan I am absolutely delighted to be returning to London and this role, wonderfully written by Andrew Sherlock. Especially in the year that would have seen Brian Epstein celebrate his 80th Birthday.”
“Andrew Lancel as Epstein is terrific...
As the boy, Will Finlason gracefully mingles brashness and compassion.”
The Times 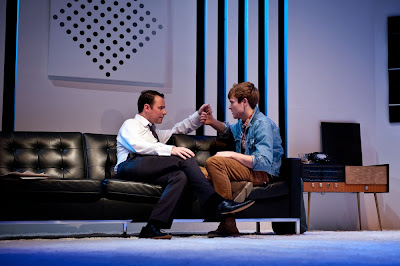 Jen Heyes, Director and Co-Producer of Epstein: The Man Who Made The Beatles said: “With their phenomenal reviews and the audience reactions; I am absolutely delighted to cast the amazing talents of Andrew Lancel & Will Finlason for the production’s next incarnation in front of a West End audience. They are both the embodiment of the characters and I believe their commitment and stage chemistry is a key component to the show’s future success.”
Bill Elms, Co-Producer of Epstein: The Man Who Made The Beatles said: “We are absolutely delighted to be taking Epstein: The Man Who Made The Beatles to London and to a wider audience. After the amazing feedback we received from audiences in Liverpool – including those who knew Brian – we felt that the next natural step was a West End run and we hope London loves the show as much as Liverpool. I can’t wait for the show to open in our capital, and the Leicester Square Theatre – in the heart of the theatreland, with Soho on the doorstep – it is the ideal venue.”
This two-hander play imagines this brilliant but troubled man’s drug-fuelled final days whilst looking back upon his illustrious adult life and meteoric career from his drama school days to managing the world’s biggest pop group - a must-see opportunity to discover a previously unexplored story and celebrate a true icon of 1960’s popular culture – a man who shaped music and style across the world.
Running from 5 August – 6 September 2014 (previews from 30 July) at London’s Leicester Square Theatre, Epstein: The Man Who Made The Beatles is brought to you by Bill Elms & Jen Heyes Productions Ltd and written by Andrew Sherlock (Wall Talks and The Shankly Show), who all hail from the city.
“At times comic, at times intensely moving... Epstein is not merely an exercise in nostalgia, it also finds the real man lurking inside an enigma.”
The Arts Desk

The official production charity partner is CALM www.thecalmzone.net.
More information on Epstein: The Man Who Made The Beatles can be found at www.epsteintheplay.com

Tickets on sale from Thursday 17 Oct at 10am

Running Time 2hrs approx
Suitable for age 14+
HOW TO BOOK:
Book in person at the venue, online at www.leicestersquaretheatre.com or via telephone on 08448 733433
__________________________________________________________________________________
Brian Epstein
Born in Liverpool in 1934 to Jewish descent, the cool, modern, gay and urbane Brian Epstein spent his early adult life working for the family business NEMS (North End Music Stores), he was drafted into the Royal Army Service Corps and moved to London to join RADA. He returned to Liverpool to manage the brand new NEMS city centre music store and not long after was the historic lunchtime visit to the famous Cavern Club to hear four Liverpool lads perform and the rest is history. Brian died in 1967 of an accidental overdose at the age of 32.
About the writer and producers
Epstein: The Man Who Made The Beatles is brought to you by Bill Elms & Jen Heyes Productions Ltd, written by Andrew Sherlock (Wall Talks and The Shankly Show) staged and directed by Jen Heyes (Tony Teardrop, Treasured, Blood Wedding).