Floor Block from St Peter's For Sale Via eBay!


Would you like to own a piece of St Peter's Church Hall, the place where John Lennon was first introduced to Paul McCartney on July 6 1957?  Well, this could be your chance!

In 2001 a fire in one of the side rooms in the hall resulted in the replacement of small areas of the floor.  All the floor blocks which had suffered various degrees of fire damaged were saved and, as part of its fund-raising efforts, a very limited number of the blocks have been made available for sale by the Church on eBay.

At the time of posting this piece, bidding stood at over £1000 to the astonishment, and delight, of everyone associated with St Peter's.

A similar floor block was sold at the Beatles Auction at LIPA, Liverpool, in August for £250, and that's now looking like a real bargain!

The Floor Block will come with a Certificate of Authenticity, personally signed by the Rector of St Peter's, Revd. Kip Crooks.    As stated on the Certificate, the wooden floor block formed part of the original floor in the Church Hall at St Peter's where John Lennon met Paul McCartney on Saturday 6th July 1957.

For further details of the sale, or to bid, click HERE to go to the eBay listing. 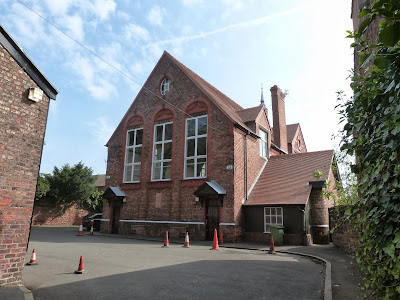