Help take "Epstein: The Man Who Made the Beatles" to the West End


Help us in bringing the story of Beatles manager and music entrepreneur Brian Epstein to London's West End stage.
CALLING ALL BEATLES FANS!
We are asking all Beatles fans to join us and be part of an historic journey to take this new Beatles play to London's West End.
We want to take the story of The Beatles manager Brian Epstein and tell his untold story to a National and International audience and we are nearly there.  By joining together as fans of the Beatles to support the transfer, you can play your part in helping us to make this happen.

We have the venue, we have the cast, we have the crew; now we need YOU to help us by supporting this production and getting it out there to our fellow Beatle fans across the Globe and joining us by giving as little or as much as you can in exchange for the various rewards on offer.  Your support will enable us cover the cost of making the necessary transformation of the production for a West End Audience and assist us with the Marketing budget needed to promote a show such as this in London.
Epstein: The Man Who Made The Beatles is a window into the private world of the music entrepreneur whose stellar career as Beatles Manager made him a household name yet whose controversial personal life remained very much in the closet. Brian died in 1967 of an accidental overdose at the age of 32.
Acclaimed stage and TV actor Andrew Lancel (Coronation Street, The Bill) and newcomer Will Finlason will return to the roles of Brian Epstein and the fictional character ‘This Boy’ respectively, for which they each received rave reviews during the initial Liverpool run, where the show premiered in November 2012 as part of the city’s officialBeatles 50th Anniversary celebrations at the Epstein Theatre.
This two-hander play imagines this brilliant but troubled man’s drug-fuelled final days whilst looking back upon his illustrious adult life and meteoric career from his drama school days to managing the world’s biggest pop group - a must-see opportunity to discover a previously unexplored story and celebrate a true icon of 1960’s popular culture – a man who shaped music and style across the world.
Running from 5 August – 6 September 2014 (previews from 30 July) at London’s Leicester Square Theatre, Epstein: The Man Who Made The Beatles is brought to you by Bill Elms & Jen Heyes Productions Ltd and written by Andrew Sherlock (Wall Talks and The Shankly Show), who all hail from the city.
“Andrew Lancel as Epstein is terrific... As the boy, Will Finlason gracefully mingles brashness and compassion.” The Times
“A show of thought-provoking insight and raw emotion… The Beatles Manager superbly portrayed by Andrew Lancel. An experience not to be missed!” The Stage
“At times comic, at times intensely moving... Epstein is not merely an exercise in nostalgia, it also finds the real man lurking inside an enigma.” The Arts Desk
“An evocative and moving history lesson, enlivened with wit - enthralling for those who were there (and still remember it) and for a new generation discovering their musical roots.” Whatsonstage.com
We will get by with little help from our friends.
To find out more about this project, or to pledge your support, visit the Kickstarter website by clicking HERE 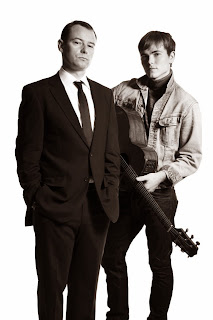 Last year I felt privileged to be part of the audience in the Epstein Theatre when "Epstein: The Man Who Made the Beatles" played nightly to packed houses.  The first time I saw the play, there were many people sitting near me who had known Brian personally.  Their gasp of recognition, and of approval, when Andrew Lancel first stepped on stage echoed around the theatre, as did the resounding applause at the end of the play.  In my review, I said, "Thank you Andrew, Will and everyone associated with "Epstein" for bringing Brian alive again and for giving him his rightful place in the Beatles' story and in my love for The Beatles.  I never knew how much I missed Brian's presence until last night.  Now, I'll never forget."
Everyone should have the chance to see this superb play and that is why the British Beatles Fan Club is also urging Beatles fans everywhere to support this Kickstarter project.  Every little helps, and there are some great rewards available for a donation of as little as £5.00.  Please help!
To read our full review of "Epstein: The Man Who Made the Beatles" click HERE
Posted by Donna J at 18:25