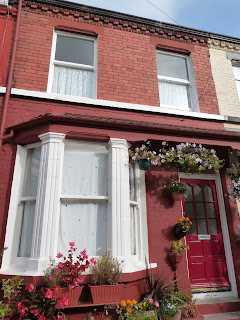 "Excitement tonight at The Cavern Club when 9, Newcastle Road, the childhood home of John Lennon, went under the hammer.  The start of the auction was delayed as there were problems contacting a mystery telephone bidder from the USA.  But then, at 6.45, the auctioneer started explaining the legalities, and then the bidding started.  The opening bid was £150,000, which was the estimated value of the house ... but that was without the Lennon connection.

About 50 people were in the Cavern Live Lounge for the auction, but only around 4 or 5 were bidding. Slowly at first, sometimes going up by only £1,000 at a time, the bidding increased.  Then the excitement mounted as it became apparent there were two potential buyers left in a bidding war,one in the room and a mystery American lady on the phone.

Everyone was holding their breath, and then the man in the room dropped out at £475,000.  The house was bought for a staggering £480,000!  I was sitting right next to the vendors who I know from my tours, and turned to see the lady who was sitting with her head in her hands - she said to me "I feel sick!" but she was obviously delighted with the result.

So who is the mystery bidder? Would love to know!"

Earlier that afternoon, Donna Jackson of the British Beatles Fan Club had been invited round to 9 Newcastle Road for one last visit before the sale.  Photographs had not been allowed during the viewing period but we were delighted, and very privileged, to be given permission to take and publish photos of some of the features inside the property.

As you can see from these photos, the house needs some attention, and decorating, but we hope that the new buyer keeps as many of the original features as possible, and the character of the house where John spent the first few years of his life.  We'd very much like to thank the vendor for allowing us access, and for her permission to share the photos with you.