Thanks to Damian Smyth from West Dublin Access Radio (http://wdar.ie/). Tune in every Tuesday for Damian and Mick's Beatle Bug Radio Show

Four suits, used as part of the promotion for the film A Hard Day's Night are on display in the windows of Arnotts department store in Dublin until 11th of November as part of the city's celebration of the 50th anniversary of the Beatles playing in the city back in 1963.

This is the first time the four Beatles suits have been displayed outside of their normal environment at The Museum of Style Icons. The autographed left-handed Hofner Violin bass also on display at Arnotts was obtained by way of auction by Newbridge Silverware but never in fact used by Paul. 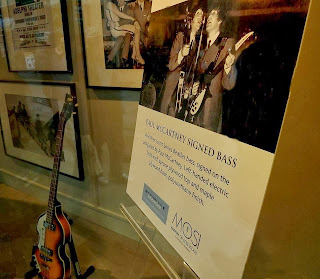 These suits were provided for the Beatles by Dougie Millings and his son Gordon. Dougie charged £31 per suit, and was also given a cameo role in A Hard Day’s Night – the part of the tailor. Dougie also made the suits for the original Madame Tussaud’s waxwork figures of the Beatles. 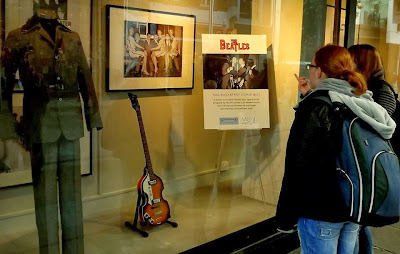 Arnotts is also marking the anniversary with a photo display at the rear of the store: Abbey Road to Abbey Street Dublin.  This marks the site of the Adelphi Cinema where the Beatles gave their only concert in Dublin in November 1963.

The Adelphi Cinema in Dublin’s Middle Abbey Street was a 2, 300-seat movie palace in an Art Modern Style designed by the English cinema architect W.R. Glen for the ABC group and opened in 1939. The façade was symmetrical, with art deco detailing. The tall windows once lit a fashionable balcony café. A streamlined canopy underneath the second-storey windows originally covered the entrance, with its six pairs of elegant doors. 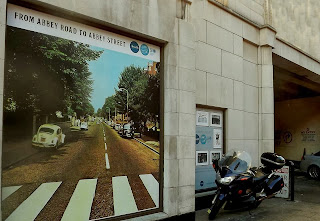 While primarily a cinema, the Adelphi did feature live acts as well, most notably the only appearance in Dublin by the Beatles in 1963. Other performers to appear at the Adelphi included Marlene Dietrich, Louis Armstrong, Diana Ross and Roy Orbison. In 1976, the cinema was triplexed, and later became a quad. Open until 1995, the Adelphi was demolished shortly after and part of its façade retained to provide car parking for the expanded Arnott's Department Store. Not only was the fine entrance removed to provide a massive holding area for cars, but the façade was clumsily extended upwards to mask the taller building. This is obvious to all, as the stonework has failed to weather to the same colour.

The 50th Anniversary Celebrations culminate with the Dublin Beatles Festival taking place from November 7-10 and featuring some great bands as well as John Lennon's Original Quarrymen!  A few tickets are still available.  For more information, including how to buy tickets, visit the website by clicking HERE