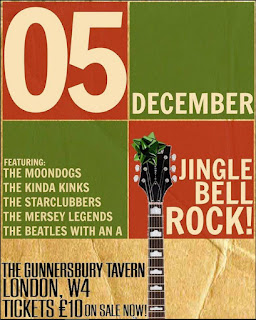 Go back to the Sixties this Christmas with a fabulous event on 5th December - Jingle Bell ROCK!

Five bands are in the line up and will be playing the varieties of the 1960s - including Beatleweek favourites the Starclubbers and Johnny and the Moondogs, as well as London's favourite Beatles tribute band "The Beatles with an A". Also on the bill are The Mersey legends (1st managed by The Beatles first manger Alan Williams in the 1960's) playing all the Merseybeat classics, along with a fantastic Kinks tribute band.

The event is being held at The legendary Gunnersbury Tavern (Chiswick High Road, opposite Gunnersbury Station), tickets are £10 in advance (via https://www.eventbrite.co.uk/e/jingle-bell-rock-tickets-18174580660?aff=efbevent ) or £12 on the door.

For more information go to the event Facebook page at http://facebook.com/jinglebellrockevent

Find this event and more on our What's On page and if you are a tribute band and want to be added to the calendar, just email us your schedule.
Posted by British Beatles Fan Club at 23:53 No comments:


A Young Merseyside writer has beaten two seasoned dramatists to win £150 in the Ticket to Write international Beatles-themed play festival.

Patrick Maguire from Litherland’s play You Are Lennon took the honours against Stalking The Beatles by Maureen Brady Johnson from Oberlin, Ohio and Face in a Jar entered by Rob Taylor from London.

The three one-act plays, staged at Unity Theatre, Liverpool, on Friday 16 and Saturday 17 October, were judged by theatre professionals Ian Kellgren and Clare Dow with the audience from both nights making a third judge.

“It was just really great to see the play staged,” said a delighted Patrick after the result was announced on Saturday.

Patrick graduated from The Young Writers Course hosted by The Everyman and Playhouse Theatres in June 2014 and was  a semi-finalist of Ticket to Write’s maiden festival.

“All the plays were warmly applauded by the audience and I’m always humbled by the effort put in by the teams,” said producer Jamie Gaskin from Southport, who devised the event.

Over its four years the Ticket to Write Festival has attracted nearly 80 plays about Liverpool’s favourite sons.

More details about the event and the people involved at  www.acedrama.co.uk
Posted by British Beatles Fan Club at 00:15 No comments:

Email ThisBlogThis!Share to TwitterShare to FacebookShare to Pinterest
Labels: Stage and Screen

A Life with The Beatles - Now playing London

For the first time in London, after the great success at the Edinburgh Fringe Festival, A Life With the Beatles is playing at The Kings Head Theatre from November 23rd through November 28th.
The show is an amazing Magical Mystery Tour of the Beatles’ history, focused on the night of the recording of A Day in the Life, the song that closes their most famous album, Sgt. Pepper's Lonely Hearts Club Band.

This incredible story is told from Neil Aspinall’s perspective, the Beatles’ road manager since the early days in Liverpool, the only one who was always at their side, behind the scenes and away from limelight, from 1961 to the 1970 break-up, and who later became the CEO of Apple Corps.
Groups can call the box office on 02072268561 and for every ten tickets booked you get one free and the booking fee will be waived For more information on ‪#‎Festival45‬ or to book online, please visit our website:https://kingsheadtheatre.ticketsolve.com/shows/873541426/events

The King's Head Theatre is a Registered Charity 1161483
Posted by British Beatles Fan Club at 00:22 No comments:

The new video for the band's single "Dear John" is released on October 9th and includes appearances by both fans and stars . (Further details to follow.)  They can be seen in the unique lyric video holding signs with the words of the track and of Lennon's iconic "Imagine".

Pictures and videos were sent in from four different continents including countries as far away as Iran, Thailand and Uganda.

"Our intention behind the video was to bring together the millions of fans around the world to celebrate John's 75th, and also to show how his music and legacy for peace has gone on to inspire people of different generations, race, religion, and nationality" say the band. "We wanted to sing about peace and write about peace at a time in our world when we need it most and we called upon a little help from our friends to make it happen."

The London based Canadian trio released their acclaimed debut album "Organized Insanity" earlier this year and "Dear John" was written in dedication to Lennon. Celebrated producer Terry Brown was at the helm.

The group recently became official ambassadors of NYC based charity WhyHunger, and will donate 100% of net income from online sales of the song to the organisation, a leading charity to end hunger and poverty around the world.  http://blurredvisionmusic.com
EPK: https://www.youtube.com/watch?v=jhg0gFwd2_A
WhyHunger: http://whyhunger.org
Posted by British Beatles Fan Club at 12:00 No comments:

Birthday tribute to John from a fan

Today John Lennon would have celebrated his 75th birthday. People all over the world are marking the day in their own special way. We are sharing with you a song written and produced by one of our members and a frequent contributor to our Fan Art Page. We hope you enjoy this video tribute to John from club member Alan Millen and the band Newcastle Road.

Posted by British Beatles Fan Club at 05:30 No comments:

Email ThisBlogThis!Share to TwitterShare to FacebookShare to Pinterest
Labels: Tribute

COME TOGETHER OVER AN INCREDIBLE THEMED CHOCOLATE CAKE FOR JOHN LENNON’S 75TH BIRTHDAY
*****
A chocolate cake to celebrate John Lennon’s 75th birthday will be unveiled at a special event at the Beatles Story, Albert Dock, as his sister Julia Baird launches a campaign to fight against food poverty.
The design of the cake is being kept top secret until October 9th – John’s birthday – when it will be shown in public for the first time at The Beatles Story.
Garston-based cookery studio Can Cook have created the cake which is made out of chocolate because that was John Lennon’s favourite.
Julia said: “When John was young, it was war time and food was scarce so our family used to save up our chocolate rations so that when John’s birthday was coming up we could make him his favourite cake.
“He loved chocolate cake and this year as it would have been John’s 75th birthday I wanted to tell the story and tie it in with fighting food poverty in his hometown of Liverpool today.”
The chocolate cake will be unveiled at a press conference at the Beatles Story at Albert Dock in Liverpool at 11am on Friday 9th October.
The cake will be auctioned with all proceeds going to Can Cook to support the ‘Imagine No Food Poverty’ campaign.
The ‘Imagine No Food Poverty’ campaign is being launched with a video featuring John’s sister, Julia, his schoolboy friend Tim Holmes and Robbie Davison, Director from Can Cook.
The video highlights the problem of food poverty in Liverpool and across Britain, encouraging people to cook using healthy ingredients to make nourishing meals, even on a tight budget.
Robbie said: “Food poverty in the UK means over a million families with children are going hungry.
“Our solution is to provide fresh food to everyone who is hungry. By joining the ‘Imagine No Food Poverty’ campaign you will help feed good fresh food to people when they most need it.
"As part of the launch of this campaign, we will also be retailing a special chocolate brownie that will be sold in the Beatles Story's shops, cafés and through the other Beatles partners in Liverpool. For every brownie sold, we will make a donation towards a meal for someone suffering from food poverty."
As part of the celebrations, Beatles fans from Liverpool and around the world are being encouraged to send birthday messages on social media to mark John’s 75th birthday.
Fans are encouraged to get involved with John’s birthday celebrations via the Beatles Story’s Facebook, Twitter and Instagram accounts by sending their well wishes and using the #JL75 hashtag.
Martin King, of the Beatles Story, said: “John Lennon is a global musical icon and as this year would have been his 75th, we would like to see people across the world celebrating too by sharing their messages on social media using the #JL75.
“Let’s create a viral multimedia conversation for one of the greatest musicians the world has enjoyed.”
Also to mark John’s birthday the Beatles Story recently unveiled new memorabilia – the last piano John ever played – alongside an exhibition of never before seen pictures of John Lennon taken by American photographer, Bob Gruen.
Bob served as John’s personal photographer during his time in New York in the 1970s and is credited with taking some of the most famous pictures of John Lennon in his post-Beatles career.
Other Liverpool Beatles partners, the Cavern Club and Hard Day’s Night Hotel, are also marking this occasion with special activities taking place all week.
The Beatles Story is celebrating its 25th anniversary this year and is credited as the world’s largest permanent exhibition solely dedicated to the lives and times of The Beatles.
Posted by British Beatles Fan Club at 01:00 No comments: 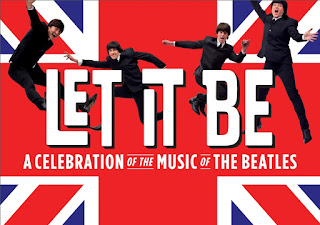 Our latest competition to win tickets to see Let it Be on October 14th in Liverpool is over and we are happy to congratulate the following winners:

Marie Mouat - Rachel Clynch -  David Stansfield  - Lucy Barrett  - Hazel James
We have emailed all winners to notify them.  Thank you to all who entered.
Posted by British Beatles Fan Club at 23:27 No comments: