In the 1960's Tony Booth was the original artist for The Beatles & Brian Epstein in the 1960s where he produced hundreds of the original gig posters and signs round Liverpool during the Merseybeat era.
Starting Wednesday 24th August and running till late September, he is hosting an exhibition in Liverpool City Centre at the View Two Gallery (near the Cavern Club) and this will be the first time ever this original artwork for The Beatles will be shown together in one place.

The exhibition is completely free for anyone who wants to visit.  Below are some links to additional information:

Tony's grandson alerted us to this event and he says his grandfather just wants "to give as many people the chance to visit the exhibition as it truly is a unique chance to witness a bit of history for any Beatle enthusiast."

Posted by British Beatles Fan Club at 14:44 No comments:

"Bigger Than Jesus" film in the works

We've learned of a new film in the works  about the impact of John's fateful words back in 1966 when he commented that the Beatles were bigger than Jesus.

This documentary documentary feature film is being made about the 'Bigger than Jesus' conspiracy by a prize winning British TV producer and the production will include a vast array of interviews both in the UK and the USA - including one of the last given by Tony Barrow.  Also interviewed was with the wonderful Maureen Cleave, who carried out the original interview with John in early 1966.

To date the project has been privately funded, but a crowd-funding campaign to help finish it off  will kick off before year end.  In the meantime, there is a Facebook site designed to create a community of fans who are interested in this story and to keep fans informed of the progress of the project.

We will report again on this project later in the year when we learn more. In the meantime, if you are interested "like" the Facebook site.
Posted by British Beatles Fan Club at 22:49 No comments:

Stephen Kennedy, an Irish playwright who also organizes the annual Dublin Beatles Day has shared some exciting news.   The national broadcaster in Ireland, RTE RADIO ONE, will broadcast his play DEATH AND THE BEATLES FAN at 8pm on Sunday, August 21st.  The play is a black comedy about what happens when Death attempts to kill a Beatles’ fan who really has no interest in dying.  It’s basically a Beatles-filled spoof of The Seventh Seal.  The play will be directed by Gorretti Slavin – and she has chosen three great actors for the piece – Jonathan Ryan, Joe Taylor and Joe Hanley.  Beatle fans all over the world will be able to listen to the play at www.rte.ie/radio1.


Listen and enjoy as I am sure the play will be fab. Last October BBC RADIO 2 broadcast his play JOHN LENNON’S LAST DAY to mark what would have been John Lennon’s 75th birthday.  It was performed by Ian Hart.  The BBC have recently entered that play for an IMISON AWARD which is  an award in the UK which is presented annually to the best audio drama script by a new writer.  The winner will be announced in early January 2017. Good luck to Stephen.
Stephen also has a stage play that will return to the stage in the Autumn for those who missed it last February.  PETE BEST OF THE BEATLES had its debut run at the New Theatre in Dublin in February – and the play had full houses and standing ovations.  Padraic McGinley played the part of Pete Best – and he was incredible.

Posted by British Beatles Fan Club at 01:17 No comments:

Email ThisBlogThis!Share to TwitterShare to FacebookShare to Pinterest
Labels: Mark your calendar, Radio

See the press release below about an exhibit now open in London that features a never-before-seen shot of The Beatles filming Strawberry Fields Forever and Penny Lane by photographer Mike Champion.
Image of an Icon: A Collaborative Exhibition
Exhibit dates: 11th August – 18th September 2016
This Summer Proud Chelsea is pleased to present 'Image of an Icon' featuring the most iconic and influential faces from fashion, music, sport and film from the photographers at the heart of Proud Galleries’ 20 year history.
This unique exhibition will take you on an awe-inspiring journey through the past century and
the photographs that encapsulate the length and breadth of popular culture. Featuring a mesmerising portrait of the world’s first supermodel and fashion muse, Twiggy, taken by Justin de Villeneuve, an ethereal looking Jane Birkin and her lover Serge Gainsbourg captured by her brother, Andrew Birkin, Michael Joseph’s Hogarthian portraits from the Beggars Banquet shoot in ’68, a never-before-seen shot of The Beatles filming Strawberry Fields Forever and Penny Lane by photographer Mike Champion, David Montgomery’s iconic shots of Jimi Hendrix’s 1968 Electric Ladyland studio album cover and a glimpse into the making of the cult classic 'Withnail & I' through the lens of internationally renowned photographer Murray Close. Further portraits of icons such as David Bowie, Jimi Hendrix and Blondie will also be shown along with a collection of commemorative shots of the late, great Muhammad Ali by personal photographer, Michael Gaffney.
Proud Chelsea offers visitors an opportunity to peruse an exceptional collection of the most classic photography of all time,never seen before in one complete exhibition. Whether you are a first time visitor or a Proud Galleries regular, this exhibition will reignite your love of some of the most iconic portraits of the 20th century.
Entry is free.  Visit Proud Chelsea online for more information.
Posted by British Beatles Fan Club at 00:53 No comments:

Painting by the Beatles Inspires 'Art in a Corner' Charity Event

ART IN A CORNER is endorsed by Paul McCartney and supported by Ringo Starr.

ART IN A CORNER
Inspired by the only known painting ever made by The Beatles.

Tokyo, 1966: The Beatles create Images of a Woman, the only painting they ever made.

50 years later, some of the biggest names in music - including Beach Boy Brian Wilson, Elvis Costello and The Bootleg Beatles - have followed in The Beatles footsteps to create their own versions of this unique piece of music history.

The project is organised in support of Children & the Arts and Youth Music, two charities working with over 100,000 children and young people each year.

Exclusive, limited edition prints and posters are available to order now via http://www.pledgemusic.com/projects/artinacorner with much more to come over the coming weeks.

The paintings will be shown in a series of exhibitions across the UK - held throughout September and October, 2016 - before being sold in support of these two charities:

Exhibited artwork will also include archive photos of The Beatles’ 1966 tour of Japan by renowned British photographer Robert Whitaker.

The Beatles arrived in Tokyo ready to play three concerts at Budakon, Japan’s premier martial arts arena. Because of security fears for the band’s safety and protests against their intrusion into such an iconic Japanese institution, all four were kept on lockdown inside the Tokyo Hilton between shows.

To keep them entertained, manager Brian Epstein brought in a set of art supplies, laid a large paper canvas on a table and placed a lamp in the centre. He then left four of the most famous men in the world to get creative.

Posted by British Beatles Fan Club at 23:55 No comments: 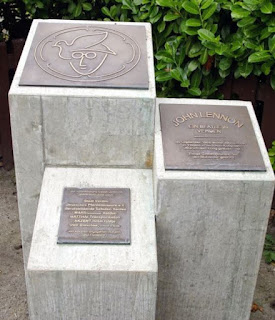 50 Years ago in Verden Germany, John Lennon arrived to film scenes the antiwar film “How I Won the War."  Most of the film was filmed in Almeria Spain, but for three days he was in Verden and the residents of the town remember it well.

In this BILD newspaper article published just this week, Gerald Piepenburg, age 50, says that the Beatles are still very popular in Verden and he is a huge fan although he was just a baby in the Beatles heyday.  In fact, he is the organizer of a weekly “Stammtisch” about the Beatles.  A Stammtisch is a weekly meetup of people in a pub to have a few drinks and talk.  He believes that the town is right to preserve and maintain their Beatles heritage.

Filming in Verden was done at the Brunnenweg barracks and the Mill Gate where there is now Lennon Memorial that was erected back in 2008.

Mayor Lutz Brockmann, age 55, recounts how some of the older children in the town skipped school when John Lennon was in town to do the filming and that it was “very exciting for us!”  He also reveals that many fan clubs have visited Verden just to see the only Lennon Memorial in all of Germany.

A huge meetup of Beatles fans was planned for today at 2pm in an effort to keep this tourist attraction from being forgotten.  Piepenburg has a dream goal.  He would love to create a fan meeting place modeled after the Strawberry Fields Memorial in Central Park in New York.

On September 16, there is a guided 90-minute walking tour with a meal included for 22 Euro. The tour entitled “In the Footsteps of the Famous Beatles” will explore both the history of Verden and John’s famous visit.  More details are available on the Verden website.

See a television interview with the Stammtisch group at the memorial.  In the interview you can see the hotel where he stayed and photos of his visit.
See photos of the memorial and of John in Verden in the BILD article.
Posted by British Beatles Fan Club at 17:54 No comments: 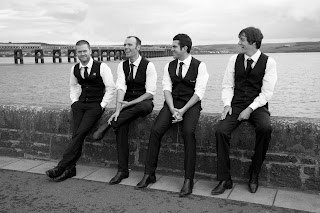 Revolver by The Beatles is about to celebrate its 50th year.  In order to mark this birthday in style, the people who bring you the Dublin Beatles Festival have organised a BEATLES DAY at the Workman’s Club in Dublin on Saturday, November 5th.

The highlight of the day will be a live performance of Revolver by REVOLVER from Scotland – followed by a second set of them playing other songs from The Beatles.

Tickets for the gig have just gone on sale – and they cost €20: Get Tickets Here 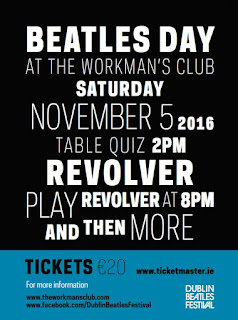 Running order for the show
Plus – the hugely popular annual BEATLES TABLE QUIZ will take play at 2pm on that same day at the Workman’s Club.  As usual, there will be lots of great prizes and brilliant questions – and plenty of fun too.  It costs €40 for a team of four.  To register a team – people should contact dublinbeatlesfestival@gmail.com.

Posted by British Beatles Fan Club at 23:26 No comments: