Review: We All Want a Yellow Submarine! 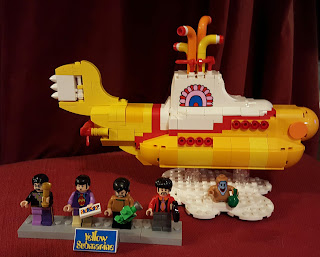 Lego recently released a new Beatles Yellow Submarine set and asked the British Beatles Fan Club if we wanted to help them get the word out.  In exchange we were given a dedicated link for our members to use when they order that benefits our club.  They also sent us one to review. 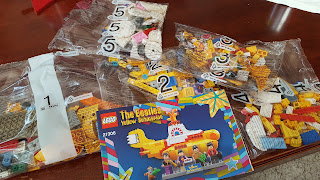 Yesterday it arrived and I am wowed!  The set includes over 500 pieces packed into 5 numbered packets along with a diagram book that walks you through the construction piece by piece.  I have never had a Lego set like this before but even with my lack of experience, I had no issues following the diagrams and in 2 and a half hours I had assembled the entire project.  It was fantastic fun and I'm impressed with the finished product as it is full of detail. 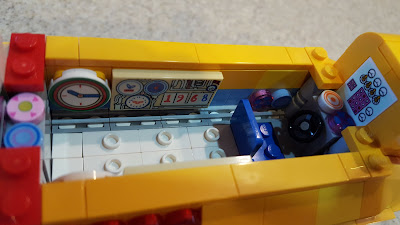 On the outside there are moving propellers, periscopes, colorful artwork and designs as well as a stand to display the finished product, but the inside is just as detailed.  The middle can lift off to expose the inner workings which has a pilot seat, steering wheel, and controls and dials. 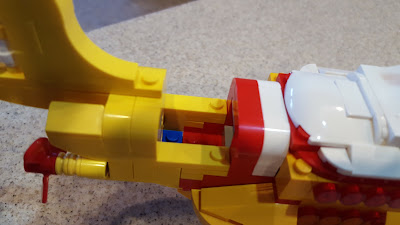 Behind the pilot seat is room for the remaining 3 Beatles to sit as well.

Each of the four Beatles figures also have to be assembled and each has something to hold when standing.  Those items need to be stored when they are sitting and another part of the submarine, a sort of submarine boot, also opens to store those item.

Additionally there is a Jeremy figure who has place to stand on the display base.


The quality of this set is high.  All decorations are stamped on - no stickers to fall off over time - and the pieces all fit together nicely.

This set is sure to make a bit hit this holiday season and would be a fun project for a family assemble together while listening to Beatles music.

If you do decide to get this for someone special on your shopping list, please consider using this British Beatles Fan Club link.  The club will benefit and that will help us to keep your membership fees from going up. 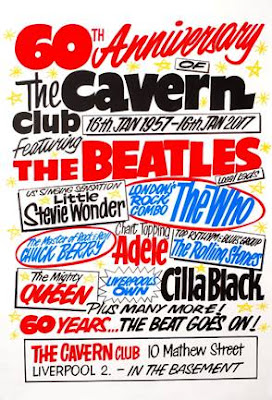 CHARITY CELEBRATION SHOW TO MARK 60th ANNIVERSARY OF WORLD FAMOUS CAVERN CLUB
Concert will raise funds for Cash For Kids and Children In Need
A special show is being staged in January 2017 to start a year of celebrations to mark the 60th anniversary of the world’s most famous club – The Cavern in Liverpool.
The History of The Cavern: Celebrating 60 Years of the Greatest Club in the World will feature The Overtures, the UK’s premier 60s tribute band and favourite of the stars. The Overtures will also be joined by special guests.
The History of The Cavern is the first event taking place in 2017 to mark the iconic venue’s landmark anniversary. The show will take place on Sunday 15 January and Monday 16 January at the Liverpool Philharmonic Hall.
The show on the Monday marks the club’s milestone birthday – making it exactly 60 years since The Cavern Club first threw its doors open to the music hungry youngsters of Liverpool back on 16 January 1957.
Over the past 60 years, The Cavern has played host some of the music industry’s biggest names including Stevie Wonder, The Who, The Rolling Stones and Queen – as well as Liverpool’s very own Cilla Black and The Beatles.
Local artist Tony Booth has been commissioned to design the 60th anniversary commemorative concert poster. It was also 60 years ago when Tony was also invited to design the now famous poster for The Cavern Club’s opening night for 16 January 1957. The anniversary has also proved to be a trip down memory lane for Tony, as the 2017 poster was even drawn on his original 60-year-old paper.
To make the shows even more nostalgic, performances will start at 19:57pm and ticket prices range from £19.57. Tickets are on sale now.
Radio City and Radio Merseyside are supporting The Cavern’s 60th anniversary celebration. To mark this special occasion, all profits from the two shows will be split between their official charities, Cash For Kids and Children In Need, respectively.
Julia Baird, John Lennon’s sister and a Director of The Cavern, explained: “The Cavern is, of course, synonymous with The Beatles since they performed here 292 times in their early career between 1961 and 1963. This show will include The Beatles, but will also pay homage to the plethora of other great artists to come out of The Cavern during its 60 years. We are delighted to have both Radio City and Radio Merseyside on board to make this a real Liverpool celebration.”
The concept of the show has been designed by The Cavern, and will take audiences on a musical journey through the six decades since the club opened in 1957 – while showcasing how Merseyside’s most famous music venue has stood the test of time and has been at the forefront of musical movements throughout its life.
Jon Keats, The Cavern’s Director of Music and Events, added: “The challenge will be to give music from each decade the respect it deserves. Performing songs by huge artists from the likes of The Beatles, Cilla Black, The Rolling Stones, The Who, The Kinks, Queen and Bo Diddley to Arctic Monkeys, Adele and Elbow – all of whom are very different. If anyone can do it The Overtures can.”
The Overtures are widely regarded as the UK’s ultimate 60s band, and are no stranger to big shows having performed privately for the likes of Sir Elton John and alongside Lionel Richie, Robin Gibb and Peter Noone.
Den Pugsley, a founder member of The Overtures, commented: “It’s impossible to fit The Cavern’s whole 60-year history into a 2-hour show but we’re going to give it a good go! There will be some unseen footage and great audio visual production to compliment the music, which will put into context what was happening in Liverpool and at The Cavern through the decades. We’re looking forward to welcoming some special guests on stage to bring this show together.”
Den added: “It’s a privilege to be asked to perform this show representing a place that is integral to Liverpool’s history, heritage and musical culture. Liverpool is always a great crowd to perform to.”
There are plans for further special events during 2017 to mark The Cavern’s 60th birthday year, including a limited edition anniversary book; a docu-film’ and a 3 CD compilation album release, plus lots more plans which are being kept under wraps.
Posted by Michele Copp at 19:06 No comments:

Our membership secretary has an uncanny ability to run into people with Beatle connections and stories in the most unlikely places such as train stations and piano classes.

Below is her latest find.  Tom Donald, a teacher at the London Contemporary School of Piano, has a video on YouTube in which he explains George Martin's fabulous arrangements to Evan Davis on BBC Newsnight.


"To me George Martin was the "mastermind" behind the great success of the Beatles, and I say that with full upmost respect to the raw talent of the Fab Four. Having said that, 'raw talent' is simply not enough. Proper detailed and analytical study of music, combined with a hunger for creativity is the key ingredients for musical greatness. George had his finger on the pulse, he had the vision to look well beyond the songs that Lennon/McCartney and Harrison composed.

When the BBC asked me to talk about George Martin's contribution to the Beatles, I really felt that words could not describe to the general listening public the influence Martin had on the Beatles through his innovations as a producer. So I asked the BBC Newsnight team if they could bring a grand piano onto the set. Because they mainly 'do politics' on Newsnight, this was no easy request, but there has to be a first for everything!"

Check out this school website for free downloadable lessons
Posted by Michele Copp at 22:54 No comments: 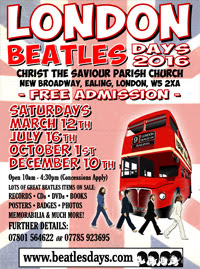 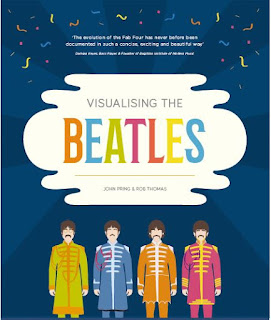 ~ Ernie Sutton
Posted by Michele Copp at 21:03 No comments:

'Deconstructing the Beatles the Film' opening November 16 in the USA

Deconstructing the Beatles the Film is opening in theaters in the USA November 16.

Posted by Michele Copp at 18:40 No comments:

Just what we've always wanted! Just released today, Lego has a new Beatles Yellow Submarine LEGO® set that is sure to be on every Beatle Fan's Christmas wishlist this year. 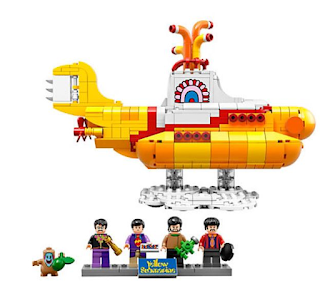 With this set you can build your very own authentic replica of the Yellow Submarine in LEGO® bricks. It is more than just the submarine. The set includes:

Lego reached out to the BBFC asking that we help spread the word and in exchange they have given us our own BBFC link to help you purchase your own set. Each sale using this dedicated link benefits the club just like our Amazon link. So have a look and if you decide to buy, please use our link to benefit the club.


Go LEGO® Shopping!
Posted by Michele Copp at 21:03 No comments: